King Michael was often remembered for distinctions that were not of his own making. He is, for example, said to have been the only man to both precede and succeed his own father as king.

But his shining achievement was assuredly his doing. It came on Aug. 23, 1944, when Michael, whose powers were perceived as largely ceremonial, bravely summoned Hitler’s crony Ion Antonescu, the fascist dictator of Romania, to his palace and arrested him.

By then Michael was in league with antigovernment forces, and soon afterward he renounced Romania’s ties to the Axis powers, paving the way for a Soviet takeover as Germany’s military strength was waning. Historians say his action might have shortened the war by months, saving tens of thousands of lives.

For years, while living mainly in Switzerland, he returned only as a stirring memory on Voice of America Christmas broadcasts. After communism fell, he headed home in December 1990 from his exile in Geneva.

“King Michael! King Michael!” crowds screamed on his arrival, before rulers elected in May 1990, shocked at his popularity, banished him again, saying that he had not secured proper permission for the visit.

In 1992, he was allowed to return for Romania’s celebration of Easter. News reports said the size of the crowds he drew horrified Romania’s leadership.

Not until 1997 was he permitted to return for another visit, during which his citizenship and his castle — but not his crown — were returned. The king visited regularly after that; in 2011 he addressed Parliament, which that year granted him the same rights as other former heads of state, and he received a standing ovation.

The Kingdom of Romania was formed in the mid-19th century when two Balkan principalities, Moldavia and Walachia, merged. Its shape and size changed radically as empires waxed and waned. It had a king only five times in its history, including Michael twice: He was king from 1927 to 1930, and again from 1940 to 1947.

Mihai Hohenzollern-Sigmaringen was born a prince on Oct. 25, 1921, in Sinaia, Romania. His father was Crown Prince Carol; his mother, Princess Helen, belonged to the Greek royal family. Other relatives belonged to Prussian royalty, and his great-great-grandmother was Queen Victoria of England.

Living mainly in Switzerland, Michael went on to be a commercial pilot, a stockbroker and, briefly, a chicken farmer. He always regarded his forced abdication as illegal. In his own mind — and in the minds of many Romanians — he died a king.

King Michael of Romania Is Dead at 96 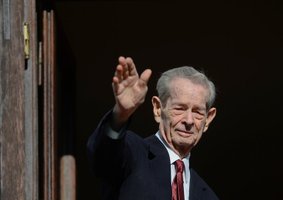 King Michael of Romania, who was credited with pre-emptively saving thousands of lives in World War II when, at 22, he had the audacity to arrest the country’s dictator, a puppet of Hitler, died on Tuesday at his residence in Switzerland. He was 96.

His death was announced in a statement from the royal family. King Michael cited a diagnosis of cancer when withdrawing from public duties last year.